Last month I was accepted into the Cleveland West Art League‘s Six in Studio residency. This is a program which CWAL selects six local artists to make work in their gallery. This program opened with an “empty walls” exhibit where each of the artist chosen had a space in the gallery to show our process in the beginning (none of us had empty walls…). The other artists included:  Ross Bochnek, Gibby, Adela Monteza de Redding, Christine Ripley, Steve Simmons. The artists were chosen by Nico Pico Train and we were all lucky enough to have Dan Neforos at our disposal to open the gallery, help install, answer questions, and be a critical eye.

At the “empty wall” opening, I began with a performance where I embroidered my left hand with a stigmata – a performance which is in close conversation with Eliza Benett’s piece, “A Womans Work is Never Done”. In this work I sectioned off the floor with a vintage floral wallpaper, sat in my grandmothers chair, and under her Catholic altar, I embroidered my hand.

I also asked our guests to sketch me a picture of their first home, which I would interact with during the month and give back to them at the end.

Working in an empty space for an entire month  gave me so much room for experimentation. During the month I recorded two performance pieces: “32 Minutes” and “Containment”.

“32 Minutes” is a piece that is still unfinished. I wrote a letter to The Man that has been the source of significant trauma in my life and asked him to participate in a conversation with me. He didn’t show up and I continued without him – asking the same questions I’ve been asking for years. This is the first part of two interviews this year. There will be an interview with The Boy later this year and probably many more to come in the future. 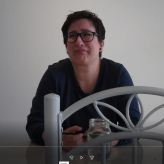 “Containment” was a shorter performance, where I broke apart a sculpture I had made with plaster and the dress I bought for my honeymoon. The breaking apart occurred under my grandmothers altar.

It was very exciting to work with thirty little sketches of peoples first homes. I utilized wax paper, watercolor, and collage with the vintage floral wallpaper from the initial performance piece.

While working on this project, I began to realize what a vulnerable action I was asking each person to take. They graciously offered up a precious memory and a hand-drawn image of their home. I cherished working on each of these little offerings.

The home has been a symbol of searching, nostalgia, and longing in my work for several years. I’ve simultaneously been working with motifs of femme domesticity and worked to honor the emotional labor that femme people and women are often expected to do silently that make a home. The floral pattern utilized, as well as the pallet chosen, exemplifies these investigations.

Finally, after a full month of work, we were all ready for our closing exhibit. For this final exhibit, I included the little houses, “Containment”, and a recent painting, “I Just Want to Go Home”. 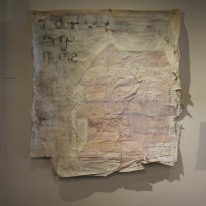 My final performance was an invitation to participate in vulnerable and intimate actions with me, a stranger. I listed a wide range of actions that could be taken as well as an opportunity for people to offer up their own actions. These actions ranged from rubbing noses, holding hands, confessions of desire, painting nails, to shaving. I used references to Marina Abramovic’a “Rhythm O” and “The Artist is Present” as well as Carrie Mae Weems “Kitchen Table Series” to formulate “To Make Known”. 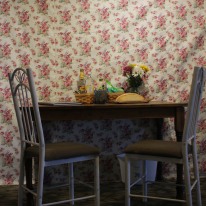 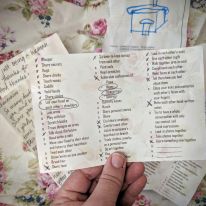 Thanks to Deborah Silver for capturing this image

The Cleveland West Art League’s Six in Studio residency provided the space and support that allowed me to expand my practice in unexpected ways and I am so grateful for that.